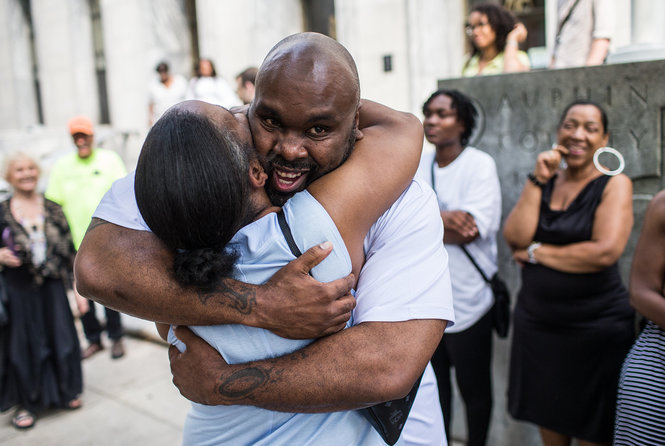 Age at the time of conviction: 22

In December 1995, Tarajay Williams was shot and killed in an alley near 14th and Market streets in Harrisburg, just outside of a bar.

Months later Lorenzo Johnson was arrested and charged with being an accomplice to the crime. His friend Corey Walker was accused of being the shooter.

Yet there was no physical evidence tying Lorenzo to the crime. And Lorenzo maintained his innocence, saying he was in New York at the time of the shooting.

Still, in March 1997, both men were convicted and sentenced to life in prison without parole.

During the trial, the prosecution relied mainly on the testimony of a woman named Carla Brown, who claimed to witness Walker shoot the victim while Lorenzo served as a lookout. She claimed the two got into a fight with Williams at the bar before the shooting. But the bouncer and bartender did not remember seeing Lorenzo.

In fact, Brown was the only witness to implicate Lorenzo in the crime, and she admitted she had been either drinking or using drugs the night of the murder.

Additionally, Brown was also a suspect in the case herself, and she did not come forward implicating Lorenzo right after the incident; instead, Detective Kevin Duffin solicited a statement from her four months after the fact.

Throughout the trial, several of the prosecution’s witnesses, including Brown, contradicted each other’s testimonies.

Lorenzo, however, consistently proclaimed his innocence, even going so far as to turn down a plea deal that would have sentenced him to only five years in prison.

Lorenzo said time and time again that he was in New York the night of the murder. And several witnesses also confirmed this alibi. However, only one testified at trial: Suquan Ripply.

Ripply said Detective Duffin threatened him with perjury charges if he testified that Lorenzo was in New York. But this didn’t scare Ripply out of testifying like it did with some other witnesses.

Lorenzo’s then-girlfriend  backed out of testifying out of fear, saying Detective Duffin allegedly threatened her with a perjury charge and said she would lose custody of her children if she testified.

In addition to this intimidation, the prosecution in Lorenzo’s case was responsible for several Brady violations, meaning some evidence was not disclosed to the defense at the time of trial. Some of this undisclosed evidence included contradictory pre-trial statements from witnesses, plea agreements offered to witnesses, and the fact that a witness was a god sibling of Detective Duffin.

With the help of attorney Michael Wiseman, Lorenzo’s conviction was vacated by the Third Circuit Court of Appeals on Oct. 5, 2011, due to insufficient evidence. After several failed appeals to the U.S. Supreme Court by the prosecuting deputy attorney general, Lorenzo was released on Jan. 18, 2012, after 16 and a half years in prison for a crime he didn’t commit.

Lorenzo soon found work in the construction field, began speaking about his wrongful conviction at colleges and even got engaged to be married. “After almost two decades of hell, life was sweet,” Lorenzo wrote.

But unfortunately this relief wouldn’t last for long.  At the end of May 2012, Lorenzo got a call from his attorney. Wiseman was crying on the phone when he told Lorenzo the news — the U.S. Supreme Court had reinstated Lorenzo’s conviction, without briefings or arguments, all in one day.

The Pennsylvania Innocence Project assisted Lorenzo and his attorney in fighting to get him out of prison for a second time. It is during this period of investigation when Lorenzo’s legal team uncovered the previously mentioned Brady violations and undisclosed evidence.

In July 2017, Lorenzo agreed to a deal with the state attorney general’s office in which his  original first-degree murder conviction and life prison term were vacated. In exchange, Lorenzo pleaded no contest to lesser charges of third-degree murder and conspiracy.

No contest is not an admission of guilt; it just means the defendant isn’t contesting the charges brought against them. Lorenzo still maintains his innocence, but took the deal to see his family, he said.

Senior Judge Lawrence F. Clark Jr. accepted the deal and sentenced Lorenzo to 10 to 20 years, and because of his time served, Lorenzo was paroled and released from prison once again. In total, Lorenzo served nearly two decades in prison for a crime he did not commit.

Lorenzo Johnson: Conviction by Any Means Necessary: How Prosecutors Stole 19 Years of My Life

Lorenzo Johnson: I was Found Innocent After 16 Years, Then Sent Back to Prison

Locked up for life: justice served?

'Lorenzo will be going home:' Deal will free man who spent 22 years in prison for Harrisburg murder